Shortly after George Floyd was killed by a white Minneapolis police officer (May 25, 2020), many graffiti and street artists responded. Tags, throw-ups, and memorial style work appeared throughout the country honoring Floyd’s memory; the legacy of black lives taken at the hands of law enforcement; and, expressing dissatisfaction with police, the criminal justice system, and the presidency of Donald Trump. Like graffiti and street art in general, much of this creative activity motivated by anger, creativity, frustration, opportunity, and sadness is illegal and unsanctioned, while other pieces were sanctioned murals.

The graffiti and street art that appeared in the United States and around the world varied in terms of its type, content, complexity, the colors used, and the surfaces in which it appeared. In other countries, not only did the protests and the graffiti and street art that accompanied it mirror many of the themes seen in the United States, but it also featured homages to individuals who died at the hands of the police under questionable circumstances.

A considerable amount of the visual communication on the streets has been murals of George Floyd; large colorful panels of his face often accompanied with his dying words “I can’t breathe” written below or on top. (Already some of these pieces have been defaced by individuals who did not like the political message undergirding these images, including counter tags with the message #whitelivesmatter).

Numerous expressions of discontent that were seen on protest signs were also replicated as graffiti and street art. These included “I can’t breathe,” or #defund the police. Acronyms such as ACAB (i.e., All Cops Are Bastards) and familiar expressions such as “Black Lives Matter” or BLM appeared to be almost everywhere.

Since it is no longer necessary to see graffiti and street art up close or via print media, on can see this activity via different social media platforms, and sometimes in real time as the writers affixed these visual communications on walls, etc. The replication effect was not simply via social media as our 24 hour cable news networks that have been covering the protests and riots have also captured the graffiti and street art as well.

Not only walls, but numerous monuments, memorials, and commemorative plaques to people and events, relics to a bygone era, have been hit with tags with the words “racists,” or “murderers” spray painted on them. (In some cases they were destroyed or even torn down).

Numerous boarded up storefronts of businesses have also provided useful canvases. In some cases, the sheer number of people on the streets provided a makeshift camouflage for the activities of the spray painters and wheat pasters, and provided them with a level of anonymity to do their work unfettered.

As the graffiti and street art laden plywood panels covering the windows of storefronts and buildings are removed, contractors and Department of Public Works employees start their power washers and the grey ghosts (i.e., anti-graffiti/street art vigilantes who paint over graffiti and street art) start doing their work, and some cities (e.g., Washington, DC) pay lip service to government sanctioned Black Lives Matter murals, it’s worth remembering that just because most graffiti and street art is ephemeral, it also has the power to raise the collective consciousness of our country.

It reminds us that we must continuously struggle for racial equality, ending police violence, and fighting for a leadership that places the will of the people before the desires of a few, the rich and the powerful. 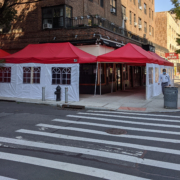 SIGN UP TO RECEIVE REGULAR BLOG POSTS BY EMAIL!

Eliminating or reducing police violence by abolishing or defunding the poli...

In the struggle to #defundthepolice, where does the money go?
Scroll to top